Trouthe Is the Highest Thing, by Robert B. Waltz 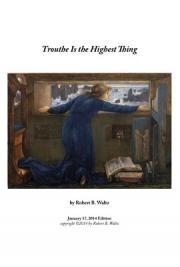 In Franklin’s tale, Geoffrey Chaucer tells us that “trouthe is the highest thing that man can keep.” But what is this “trouthe?”
It’s not exactly the truth or troth. It is a virtue more complex than either. This book looks at Chaucer’s use of the word. Chaucer also argues that it is a virtue and an emotion. An emotion now largely forgotten but still felt by some people (notably autistics) probably by Chaucer himself.
In a small way, it tries to bring back this lost virtue. This final edition adds slightly more documentation to the pre-release version.