The Writ That Went to My Heart, by David Powell 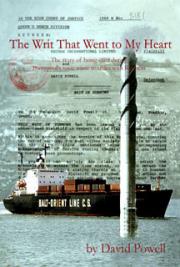 When the world was plagued with toxic waste, I led a campaign to prevent it from coming to Pontypool which is near my home. Newspapers and broadcasters were sued by the company that attracted a large share of the world’s worst chemical waste.
In connection with a BBC interview at the time of a battle against Canadian toxic waste, I also received a writ. Following a four-year fight, I became the only unscathed survivor of a libel writ from ReChem. When I walked from the High Court in 1993 I was still campaigning, though still fearful of Britain’s antiquated libel laws. Twenty years on, through the Defamation Act 2013, the position has finally changed. This book tells the story of my legal survival during the development of a historic campaign to change the face of the toxic waste trade.