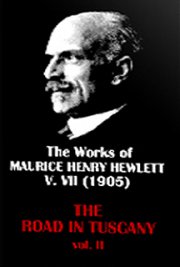 The Works of Maurice Henry Hewlett in ten volumes. V. 7- The road in Tuscany Part Two (1904). The Original Books Collection. Maurice Henry Hewlett (1861–1923), was an English historical novelist, poet and essayist. He was born at Weybridge, the eldest son of Henry Gay Hewlett, of Shaw Hall, Addington, Kent. He was educated at the London International College, Spring Grove, Isleworth, and was called to the bar in 1891. He gave up the law after the success of Forest Lovers . From 1896 to 1901 he was Keeper of Lands, Revenues, Records and Enrolments, a government post as adviser on matters of medieval law.