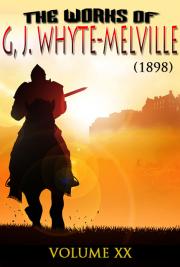 The Works of George Whyte-Melville V.20- Holmby house. The Original Books Collection. George John Whyte-Melville (1821–1878) was a Scottish novelist of the sporting-field and a poet. Born at Mount Melville, near St. Andrews. He achieved immediate success as a writer of fox-hunting stories with his first novel Digby Grand in 1854. Having served as a captain in the Coldstream Guards between 1846 and 1849, he volunteered as a major of irregular Turkish cavalry when the Crimean War began.