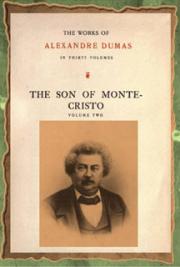 The Works of Alexandre Dumas in thirty volumes. Illustrated with drawings on wood by eminent French and american artists. V. 28- The son of Monte Cristo. Volume II. The Original Books Collection. Alexandre Dumas (24 July 1802 – 5 December 1870), also known as Alexandre Dumas, père, was a French writer, best known for his historical novels of high adventure. Translated into nearly 100 languages, these have made him one of the most widely read French authors in the world.