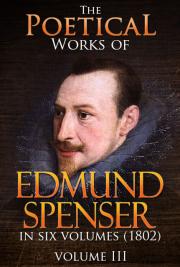 From the text of J. Upton. With a preface biographical and critical by J. Aikin, M. D.The Original Books Collection. Edmund Spenser (c. 1552 – 13 January 1599) was an English poet best known for The Faerie Queene, an epic poem and fantastical allegory celebrating the Tudor dynasty andElizabeth I. He is recognised as one of the premier craftsmen of Modern English verse in its infancy, and one of the greatest poets in the English language