The physiology of marriage 1, by Honoré de Balzac.. 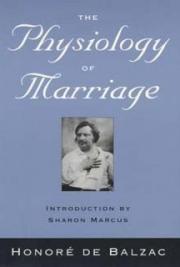 This is an odd work. George Saintsbury comments that “The Physiology of Marriage” and its companion piece “Petty Troubles of Married Life” “belong quite apart from the action of the “Comedie Humaine”, and can only be included therein by virtue of a special dispensation on the part of their author.” Saintsbury goes on to call them “grim, almost sardonic essays”. He also comments that “At times he [Balzac] seems honestly to be trying to analyze a particular phase of his subject; at other times he appears to be ridiculing the whole institution of marriage. “ This is ironic since Balzac was not married when writing the work, though Saintsburgy gives him credit for an occasional flash of keen penetration.