The observer of Genesis, the science behind the creation story, by Alberto Canen 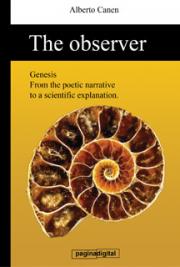 Genesis, the seven days of Creation … Where does the text that makes up the first part of the Bible come from? Is its text a mere introductory poem … or is it a narrative? What’s behind its words? Alberto Canen has found an alternative way to answer these and other questions in the Genesis. He has found a route no one had been to before, and invites the reader to discover it and make their findings with him. The author has found that hidden in the bottom of the plot there is someone. Someone who observes; someone who tells. Someone who tells what he observes. And a place, a location from which he observes. The location of the observer. The key to an exciting puzzle.