The Man Who Kept His Money In A Box, by Anthony Trollope 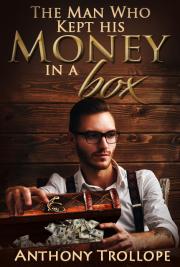 As I was not myself possessed of anything of that sort, and had no intention of going to any foreign court, I could not argue the matter with her. But I assisted her in getting together an enormous pile of luggage, among which there were seven large boxes covered with canvas, such as ladies not uncommonly carry with them when travelling. That one which she represented as being smaller than the others, and as holding jewellery, might be about a yard long by a foot and a half deep.