The Hitler Letters, by Gurmeet Mattu 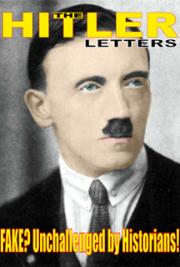 Are these letters genuine? We leave that to the reader to decide. Let us just say that their validity has not been questioned by historians. These are not the letters of the Fuhrer Hitler of the Third Reich, rather they are the letters of the starving artist Hitler in Vienna in the early years of the 20th century. As such they deal with mundane matters such as his struggle for survival rather than world shaking events. However, because they deal with his growth into maturity they show the development of his racial and political theories and as they also show his path to adulthood the content may be unsuitable for delicate readers. In any case they reveal the early days of the man who set out to conquer the world.