The Essays of Arthur Schopenhauer, by T. Bailey Sanders 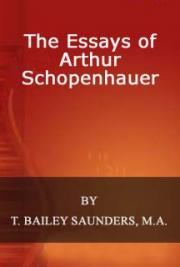 Arthur Schopenhauer is one of the most important 19th century philosophers, most famous for his work, The World as Will and Representation. He is known for having espounced a sort of philosophical pessimism that saw life as being essentially evil and futile, but saw hope in aesthetics, sympathy for others and ascetic living.