The Empire of the Nairs; Or, The Rights of Women, by James Lawrence 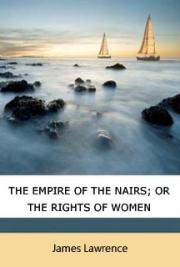 A masterpiece of utopian thought in the 18th Century. Utopian thought cast considerable light on ideas of property-holding, community, and social and political reform movements, including those for the extension of rights to slaves, women and animals. Much of the later programme of communitarian communism later associated with early socialism was outlined first in utopian form, and utopian works clearly help us plot the development of republican ideas of an agrarian law towards nineteenth-century socialism. At the same time, satires of primitivist critiques of luxury and the extension of commercial society make up one part of the ‘anti-utopian’ branch of the tradition.