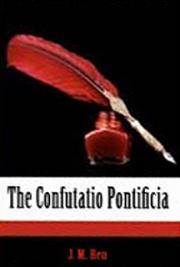 As in the Confessions of the princes and cities they enumerate among the abuses that laymen commune only under one form, and as, therefore, in their dominions both forms are administered to laymen, we must reply, according to the custom of the Holy Church, that this is incorrectly enumerated among the abuses, but that, according to the sanctions and statutes of the same Church it is rather an abuse and disobedience to administer to laymen both forms.