The Black Robe, by Wilkie Collins 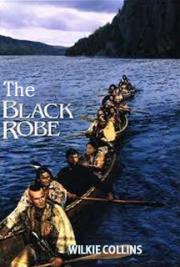 Lewis Romayne is a recluse, forced from his life of academic research by the dying call of an aunt in Paris. Subsequently involved in a duel, he returns a broken man, until he meets Stella Eyrecourt and marriage becomes a possibility. But a face from the past begins a battle for Romayne’s soul.