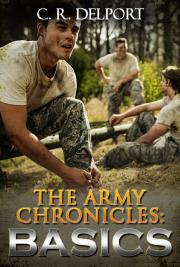 The story focuses around fictional character Chris Dempsey, and friends from 1 South African Infantry Battalion. From the moment they are thrown together in their platoon, they forge a friendship that will assist them to get through basic military training. They have to cope with the harsh realities of the military, where you do as you are told, and have to support each other through the blood, sweat and tears that the corporal dish out.They have to deal with several characters in their platoon, like the know-it-all, Frankie, who stumbles his way around and causes them endless extra runs. They have to cope with the physical demands as the corporal tries to mould them into soldiers that can fight for their country.