Slave Narratives: A Folk History of Slavery in the United States From Interviews with Former Slaves, by Anonymous. 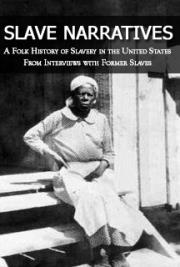 The slave narrative is a literary form which grew out of the written accounts of enslaved Africans in Britain and its colonies, including the later United States, Canada and Caribbean nations. Some six thousand former slaves from North America and the Caribbean gave accounts of their lives during the 18th and 19th centuries, with about 150 narratives published as separate books or pamphlets. In the 1930s in the United States, during the Great Depression, additional oral narratives on life during slavery were collected by writers sponsored and published by the Works Progress Administration (WPA) of the President Franklin D. Roosevelt’s administration.