She, by Henry Rider Haggard 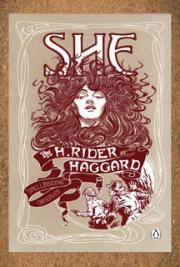 She, subtitled A History of Adventure, is a novel by Henry Rider Haggard, first serialized in The Graphic magazine from October 1886 to January 1887. She is one of the classics of imaginative literature, and with over 83 million copies sold in 44 different languages, one of the best-selling books of all time. Extraordinarily popular upon its release, She has never been out of print. According to the literary historian Andrew M. Stauffer, “She has always been Rider Haggard’s most popular and influential novel, challenged only by King Solomon’s Mines in this regard”.