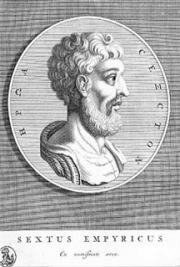 Sextus Empiricus (c. 160-210 AD), was a physician and philosopher, and has been variously reported to have lived in Alexandria, Rome, or Athens. His philosophical work is the most complete surviving account of ancient Greek and Roman skepticism. In his medical work, tradition maintains that he belonged to the “empiric school”, as reflected by his name. However, at least twice in his writings, Sextus seems to place himself closer to the “methodic school”, as his philosophical views imply.