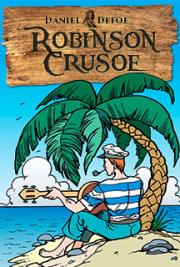 Daniel Defoe (1660-1731) trained for the ministry, became a political journalist, and finally, to many became “the father of the English novel”. He was also the author of Moll Flanders. During one of his several adventurous voyages in the 1600’s, an Englishman becomes the sole survivor of a shipwreck and lives on a deserted island for more than 28 years.