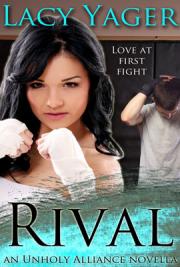 Her destiny. His determination.
Born a fifth generation vampire Chaser, seventeen-year-old Emily Santos wants nothing more than to join the family business. But Emily’s mother refuses, so Emily must channel her aggression into her martial arts training.
Black belt senior Brett Carson has decided it’s time to rid himself of his unrequited feelings for Emily. But when he finds himself in the middle of an altercation with Emily and a gang of vampires, he is drawn into a world he never expected. And Brett is hiding a secret of his own…