Psycho-practices in Mystical Traditions from the Antiquity to the Present., by Andrey Safronov 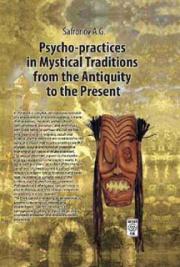 In the book a complex, retrospective research of a phenomenon of psychopractices is made: their methods, philosophical substantiations, evolution, and interaction with other forms of spiritual life. The special attention is given to the psychopracticies presented in the modern world. In this work such question, as a place of the changed conditions of consciousnesss in culture and religion, religion role in formation and social type maintenance, cultural value of the esoteric psychopracticies, are considered. Philosophical and religious roots of modern psychotherapy, and also religious processes proceeding in it are revealed. The book can be interesting as for experts-culturologists, theologians, psychologists, and also for all who is interested in esoteric and non-conventional psychology.