On Behavior, by Keith Trimm 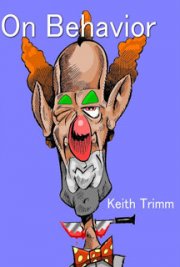 On Behavior is a book in 3 sections that deals with what makes people tick. Section one is my description of types of behavior, section two is personal interviews with real people about behavior and section three is my observations of behavior as I have seen it.
None of this is new or ground breaking; it’s my commentary on human behavior as I’ve seen it along with a large dose of interpersonal interviews tossed in.
I have an idea, I don’t know if it’s a theory so I’ll call it an idea for now. That idea is that people are made up of bits and pieces of mental stuff like grains of sand scooped up from a sand pile and placed in a bucket and aged with a lifetime of experiences and spiced with emotions. Each grain of sand is a personality trait randomly selected and added to the pile to cr…