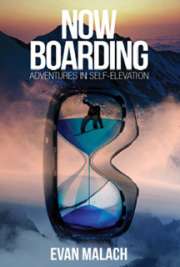 What we have done for ourselves alone dies with us. What we have done for others and the world remains and is immortal.”
They might have been the last words he would ever read. While snowboarding in the backcountry of British Columbia, Evan Malach receives this quote in a text message. As he reflects upon the words of wisdom, his phone loses power, the battery dead. Shortly afterward, he realizes he will be unable to make it out of the wild before dark. Forced to spend the night in the frigid mountains, he survives the ordeal with a new outlook on life.
Now, readers are invited along for his next adventure. Part travelogue, part philosophical exploration, and part spy thriller, this spiritual memoir follows Malach across the globe as he attempts to uncover mysteries of the universe.
Upon his return home, Malach encounters his greatest challenge yet, as his father undergoes the battle of a lifetime.
Examining the nature of time, freedom, and what makes us human, this remarkable coming-of-age journey shares synchronistic stories of a young man striving to survive, live, and thrive in a divine reality.