Nobody promised life would be easy, by Warren Fox 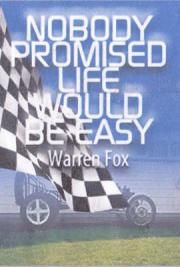 Warren Fox was born in New Zealand in 1931. His parents separated when he was five. As a child he lived for six years in Australia with his mother. Then his father gained custody of him and took him to South Africa for 18 months. When the war ended his father brought him back to New Zealand. However just after Warren’s 15th birthday, his father abandoned him and fled the country leaving him destitute. His mother was still living in Australia so Warren had to get a job to support himself. He worked in a variety of jobs and eventually ran his own business as a Hypnotherapist. He has raced motorcycles and cars. He now writes and sings country music and is happily married to his 3rd wife, Margarita.