Neewa the Wonder Dog and the Ghost Hunters! Volume One: The Indian Medicine Woman’s Mystery Revealed, by John Cerutti 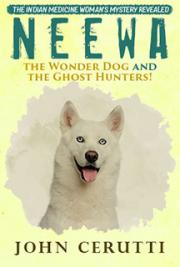 This is a story, not about Ghosts, and not about Neewa…it is a story of a teenage girl and her love for not only her sister and father…..but her growth and adjustment during her trip 1500 miles away from home. It’s a novel of two siblings– during their exciting adventure out west, separated for the first time; from their mother, grandparents, and friends. In this first person narrative, Cerutti uses a multi sensory approach, which takes the reader to a place far away—literally, to the state of Nevada- where his young family; daughters Christina (14) and Jacqueline (11) experience the opportunity of a lifetime. These three (four including Neewa) are not very different from your average American family, except they are hunting Ghosts!! The reader will feel the anticipation that they feel when searching for these supernatural beings, and you can join them! Cerutti captures the reader’s attention as he magically invites you on a journey to find the true meaning of sisterhood. These sisters quarrel, and through their mistakes, experience the truth of life–all told through the eyes of a 14 year old, who has accepted a goofy coy dog as her own. Christina, the older of the two, is teetering on the brink of disrespect as she verbally knocks down her dad, who is attempting to supervise the teenager who sees right through him. His love for his daughters is evident during their nightly ritual…. While sharing bedtime pleasantries, they say their goodnights, and I Love You’s, “Round Robin” style. It is similar to the Ron Howard’s “The Walton’s,” sitcom from the 1980’s exempt of one thing– their mother is not onboard for the journey. Christina is the cerebral one, though envious of her sister Jackie, the beauty’s, “perfect nose.” She is expected to take charge of the domestic duties, ranging from setting the dinner table, to baking the pumpkin pies. ( you will smell the aroma of the pies baking, as the author reviews the family recipe. Tina, as your typical teen, ignores her father’s direction, test limits, and heckles her sister, who is three years her junior, teasing Jackie, as only a sister can do. The sisters learn from the Indians, who believe in energy, where a spirit can take on other forms. Through symbolism; (i.e. the wind…the POW WOW) Cerutti captives the reader who envisions himself in among this circle of life….Jackie reads a passage from the book, “Indians believe the Spirit lives forever. When the body dies, the spirit is called a “spirit being” and may take the body of another living creature such as a butterfly, a wolf, or even a bear. Or a spirit being may live in the wind or earth not taking any form at all.
This family is witness to paranormal behavior, or is it normal behavior? You will laugh with them, cry with them and you can feel the love, as they are engulfed in the arms of the Indian tribe’s leader and his family. At the end of this story, you’ll want to adopt a puppy, you will wish to hug your sister, and you will be thankful say to goodnight to those you love.
I regret that this adventure, and book has come to a close, and anticipate the premier of Volume II, next year. Watch for “Neewa and the Ghost Hunters,” Volume ll, and who knows the movie may come out in a theatre near you?
Adventure and mystery in the uncanny spirit world captivate the young lives of fourteen-year-old Christina and her sister Jackie, eleven. When the family moves 1500 miles from their home in New Jersey to the desert of the American Southwest, they encounter many spirits—some good, some evil. Out West the family seeks out the paranormal, hunting ghosts with the latest, most sophisticated devices. Their searches take them to several eerie places, including a remote forest, a ghost town and a sacred burial ground. They also explore an isolated Native American stream and investigate an Indian Pow Wow. Not long after settling into their new home, Christina adopts Neewa, a half coyote female puppy with a mysterious secret. But when the puppy becomes deathly ill, the girl is determined to find…