Memoirs of a Bitch, by Twisted Sister Suki 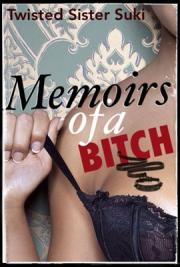 If being a bitch was an Olympic sport, Judith Chambers would win gold every time.
Stealing other women’s husbands comes natural to her, so natural she’s hired a Private Investigator to help her select the perfect candidate.
She’ll change her look, her accent, her nationality – there’s no length Judith won’t go to in order to satisfy her twisted appetites.
So what dark secrets does Judith Chambers harbor? Some say she’s a witch, some say she’s made a pact with the devil, and some say she is the devil in female form.
The first in a brand new genre called Psycho Romance, Memoirs of a Bitch is erotic, erratic, and downright sacrilegious – unlike anything you’ve ever read before.
Love her or hate her, just don’t turn your back on her – EVER!
The Sequel, Return of the Bitch, is now available from Amazon and all leading stockists.