Maximilian in Mexico. A Woman’s Reminiscences of the French Intervention 1862-1867, by Sara Yorke Stevenson 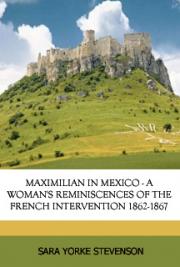 Sara Yorke Stevenson (Mrs. Cornelius Stevenson) (February 19, 1847 – November 14, 1921) was a prominent American archæologist and female rights activist.Of all the English language memoirs of the Second Empire / French Intervention, Sara Yorke Stevenson’s Maximilian in Mexico: A Woman’s Reminiscences of the French Intervention 1862 – 1867 is the most lucid, informed, and balanced. That said, she introduces her book with this caveat:
[M]y aim is not to write a historical sketch of the reign of Maximilian of Austria, nor is it to give a description of the political crisis through which Mexico passed during that period. My only desire is to furnish the reader with a point of view the value of which lies in the fact that it is that of an eyewitness who was somewhat more than an ordinary….