Legends, Traditions, and Laws of the Iroquois, or Six Nations, and History of the Tuscarora Indians, by Elias Johnson 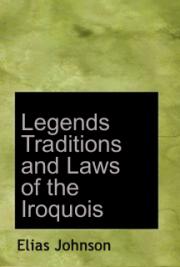 1881 comprehensive study that questions white prejudices. “In all the early histories of the American Colonies, in the stories of Indian life and the delineations of Indian character, these children of nature are represented as savages and barbarians, and in the mind of a large portion of the community the sentiment still prevails that they were blood-thirsty, revengeful, and merciless, justly a terror to both friends and foes. Children are impressed with the idea that an Indian is scarcely human, and as much to be feared as the most ferocious animal of the forest.But I am inclined to think that Indians are not alone in being savage–not alone barbarous, heartless, and merciless.”