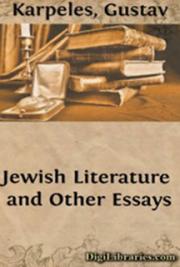 Gustav Karpeles (November 11th, 1848, Ivanovice na Hané, Moravia[1] – 1909) was a German Jewish historian of literature and editor; son of Elijah Karpeles.
He studied at the University of Breslau, where he attended also the Jewish Theological Seminary. He embraced journalism, and was successively attached to the editorial staffs of Auf der Höhe, the Breslauer Nachrichten, the Breslauer Zeitung, the Deutsche Union, and Westermann’s Deutsche Monatshefte. In 1870 he became coeditor with Samuel Enoch of the Jüdische Presse. In 1883 Karpeles settled in Berlin, where in 1890 he became editor of the Allgemeine Zeitung des Judenthums.