How I was Murdered by a Fox Monster, by M.C.Queen 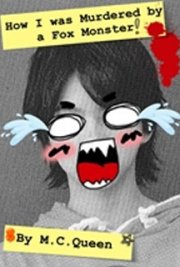 Daisuke Matsumoto here! I see you picked up my book. I knew you would because its awesome, inspirational, life changing, and its all about me!
Let’s start from the beginning. I was adopted by an old man who named me after his dead son, creepy right? He used to tell me stories of monsters who pose and animals and attack humans, also known as Obake. I thought he made it all up to scare me, but I just met a group of exorcists who confirmed my worst fear, Obake are real! If that wasn’t enough to freak me out I discovered Grandpa was up to some shady stuff, Sis has secrets stashed away, and any hot chick could be a monster plotting to rip my insides out.
God must hate me, because I don’t know my own past, my real name, and……Akito? Hey, what’s up with the knife Akito?