History of the Peloponnesian War (1840), by Thucydides 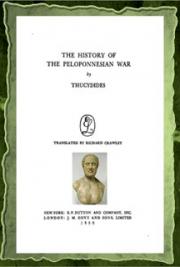 Thucydides (c. 460 – c. 395 BC) was a Greek historian and author from Alimos. His History of the Peloponnesian War recounts the 5th century BC war between Sparta and Athens to the year 411 BC. Thucydides has been dubbed the father of “scientific history”, because of his strict standards of evidence-gathering and analysis in terms of cause and effect without reference to intervention by the gods, as outlined in his introduction to his work.