Heaven vs Hell, by Holly Vane 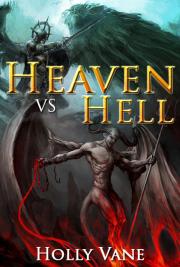 Book one of the Eternal War series. A battle has been fought in secret between the forces of Heaven & Hell since time began. Angels have always succeeded in Keeping Hell’s forces at bay…Until now. A girl had been born who will tilt the war in Hell’s corner. She is Lucifer’s salvation. *Contains graphic content not suitable to under 16’s.