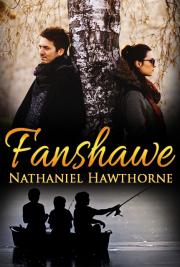 Fanshawe is the first published work of Nathaniel Hawthorne (1804-1864).The novel was based on Hawthorne’s 1820s undergraduate experiences at Bowdoin College. It was his very first attempt at writing a novel, and he published it himself. It went unnoticed and he later burned the unsold copies, and recalled as many copies as possible to be similarly destroyed. He was so ashamed of this work that even his wife and great love Sophia denied its existence, having never heard of it from Hawthorne.