CIA Analysis of the Warsaw Pact Forces: The Importance Of Clandestine Reporting, by Central Intelligence Agency 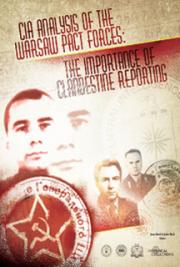 This study examines the role of clandestine reporting in CIA’s analysis of the Warsaw Pact from 1955 to 1985. The Soviet Union established itself as a threat to the West at the end of World War II by its military occupation of eastern European countries and the attempts of its armed proxies to capture Greece and South Korea.