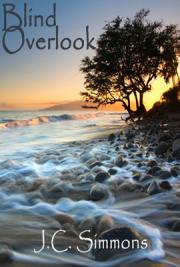 In Blind Overlook we find Leicester (pronounced “Lester”) doing a favor for an attorney friend and taking a case far removed from aviation. It involves something he knows nothing about, the art world. A beautiful, but enigmatic young woman who owns an art gallery in New Orleans hires him to travel to Maine where a body has been found fitting the description of her brother and partner in the gallery.
The brother has not been heard from and the young lady grows concerned as he was traveling with four hundred and fifty thousand dollars in cash with which to buy a collection of work by an artist named, Rockwell Kent. Delving into this situation leads Leicester straight into a confrontation with the most powerful Mafia figure in the United States, a local detective, a police sergeant, local fishermen, and a friendly, but suspicious waitress at a local cafe. The entire populace of the small community seems involved in the murder, the missing brother and his money.Maine coastal locals and offshore islands provide a unique setting for a powerful work reminiscent of Ross MacDonald or John D. McDonald. Character driven and plot oriented, this is a must read for the serious Mystery/Thriller ‘aficionado.’
There are a total of 10 ebooks in the Jay Leicester Mysteries Series by JC Simmons:
Blood on the Vine Some People Die Quick Blind Overlook Icy Blue Descent The Electra File Popping the Shine Four Nines Fine The Underground Lady Akel Dama The Candela of Cancri