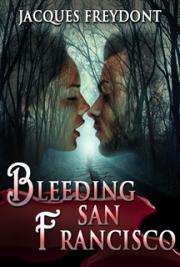 After the fall of America, a water-war breaks out between Los Angeles and San Francisco. The battle takes place in the earthquake rubble surrounding what is left of San Francisco. In this dystopian wasteland, a nightmare for the frightened amateur soldiers, Todd Wentworth, General in the San Francisco Militia, falls desperately in love with a traitor’s daughter. When she is shipped away in a prisoner exchange, Todd sneaks into the Angeleno campground to get her back. There he encounters the Achilles of the Army of Los Angeles, the warlord, Benharash. More heartbreak is in store for the forlorn couple, and more war for beleaguered San Francisco. Bleeding San Francisco places Shakespeare’s Troilus and Cressida in the gritty world of California’s future.