An historical geography of the Old and New Testament V. II (1809), by Edward Wells 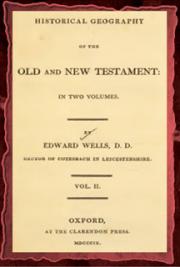 Edward Wells (1667–1727) was an English mathematician, geographer, and controversial theologian. He was inducted to the rectory of Cotesbach, Leicestershire, on 2 January 1702, and he was awarded the degrees of B.D. and D.D. on 5 April 1704. On 28 March 1716 he was instituted to the rectory of Bletchley, Buckinghamshire, on the presentation of his former pupil, Browne Willis.