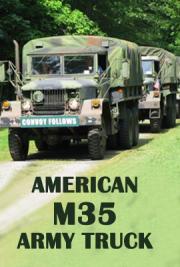 The M35 army truck was developed in the late 1940s by General Motors Corporation. It was intended to replace wartime vehicles. The design was commonly known as the Eager Beaver. Initial production contract was for 5 000 trucks. First vehicles were delivered to the US Army in 1950. The M35 was planned as an interim vehicle, however as soon as Korean War began, US Army needed these trucks in large numbers. By early 1980s over 150 000 M35 series trucks were produced. Production ceased in 1988. These trucks still remain in service with some countries.