Alice’s Evidence: A New Look at Autism, by Robert B. Waltz 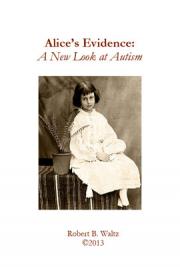 This replaces the earlier Looking Autism in the Face: Two New Perspectives on Autism. This is personal; it is the expanded combination a pair of items I wrote about autism. Part of it looks at the relationship between Charles Dodgson (Lewis Carroll) and Alice Liddell, and marshals the evidence that Dodgson was not in lust after Alice, but rather was an autistic who formed an autistic friendship with her; the rest examines six noteworthy who were afflicted with “music and mathematics” autism and shows what they accomplished, and how we should understand such people. The whole is intended to demonstrate the difficult and complicated emotions I call “autistic friendship” and trouthe.