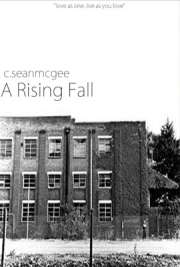 WARNING: This book contains intricate and graphic philosophy
A Rising Fall is the first book in a dystopian trilogy entitled City:aliteraryconcerto. The story starts ten years after the blackout as a group of humans struggling to fight off a conscious famine, try to re-learn empathy to save humanity in an old industrial assembly plant. In 3 days; feigned affection, deception and a black heart will take them further into the repression of their own fears in search of unconditional love.
The City Concerto through literary prose; answers one question: To what lengths would a father go and what horrible wrongs would he do, to teach a god how to love again?
Following the theme of a concerto, City is divided into three parts; A Rising Fall, Utopian Circus and I, Cannibal. Each book is then divided into three pieces and with A Rising Fall, each piece refers to a day; the three days leading to the fall of their city.
The trilogy illustrates the human emancipation from three states of love; Eros, Philos and Agape as each is torn apart under the guise of well intention as humanity; now void of identity in the wake of a century of dehumanising dependence and necessity upon industry and digital technology; has separated itself from the labour of its existence, aborting empathy and setting in place the death of mother nature. Yet, on the verge of extinction; mankind presses on; towards salvation; towards the city of light and sound; towards New Utopia