A Fatal Homecoming, by Trevor Whitton 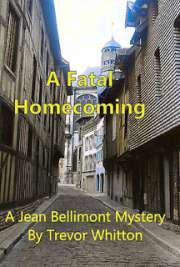 France 1310: In the woods near Troyes, a forester stumbles across the body of a stranger. As Bailli Dubois begins his investigation, it becomes apparent that the wife of his best friend is implicated. Hopelessly compromised, the Dean of the Guild of Merchants takes over the case. In the hope of uncovering new evidence, Henri dispatches his clerk – Jean Bellimont – to Paris. Amidst the squalor of the capital, he follows a trail that eventually leads him back to Troyes. Soon a second murder places Jean and Henri in a race against time to save their friend from the gallows. The story draws a compelling account of life in medieval France, and culminates in a dramatic courtroom scene where the true murderer is revealed. This is the third installment of the Jean Bellimont novels. Download it today!