123 What Are Christians Fighting For?, by John Jones 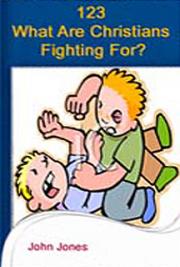 Short eBook examining war from a New Testament (New Covenant) viewpoint. Also looks into the perspectives of the Apostles and the early church, and examines the changes that occurred in Christendom under the Roman Emperor Constantine. Concludes by reflecting on today’s situation, both politically and within evangelical churches.